Bulgarian properties in city of Thessaloniki

Thessaloniki is Greece's second major economic, industrial, commercial and political centre, and a major transportation hub for the rest of southeastern Europe; its commercial port is also of great importance for Greece and its southeast European hinterland.

The capital of Northern Greece and one of the most important cities in the history of the Balkans is a living city monument, counting nowadays approximately 1.200.000 inhabitants and 23 centuries of existence and constant history. Up to the 6th century BC, the city which was built on the Thermaikos Gulf was named Thermi. However, the archeologists have proof of habitation from the 3rd millennium BC and up to the Classical Ages, in three locations in the wider area of Thessaloniki, Ano Tumba, Polihni and Karaburnaki (it is worth to be mentioned that these three locations are forming a triangle). More specifically, the city history begins in 316-315 BC, when king Kassandros united 26 smaller cities and founded this new city-nation, naming it Thessaloniki, after his wife and sister of Alexander the Great. 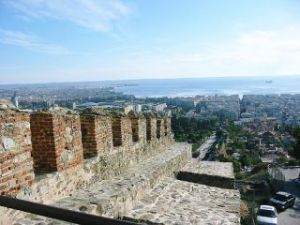 The geographical location that Kassandros chose to found Thessaloniki was no accident. The rivers of Northern Greece disembogued in the Thermaikos Gulf and that was a sufficient and important factor for the communication with the inner grounds. Apart from that, the unique location of the port and its size which was more than adequate to serve the communication with the Black Sea, all of the Eastern Ports and the islands of the Aegean Open Sea, led Kassandros to his decision. Thessaloniki soon became trading center and developed an important naval force.

Nowadays Thessaloniki is one of the most important university centres in Southeastern Europe with a busy nightlife and it hosts a large and vibrant student population. It has fantastic transport links to the popular tourist destinations in the Central Macedonia region (also known as the Balkan peninsula), Halkidiki, and Pieria. It is the second big urban centre of the country and probably the biggest of the south Balkan. It is the industrial, commercial, cul¬tural spiritual and administrative centre of the north Greece , with a minister cabinet, university, highest and higher educational centers. 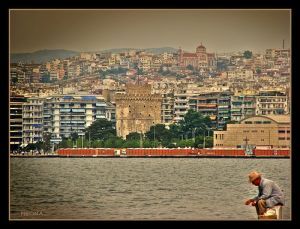 One of the most famous sightseeings of Thessaloniki is the white tower, which once guarded the eastern end of the city's sea walls, is a construction of the Ottoman sultan Suleiman the Magnificent. Until 1912, an inscription in Ottoman Turkish verse above the door dated the structure to AH 942 (1535-1536). The historian Franz Babinger speculated that the work was designed by the great Ottoman architect Sinan who is known to have built fortifications, including a similar tower at the Albanian port Valona in 1537. The present tower likely replaced an older Byzantine tower mentioned by the 12th century archbishop Eustathios.
Other attractions: St. Dimitar church, city fortress wall, Galerie Arch, St. Georgi rotunda, etc. The town benefits from good infrastructure, there are big squares and large boulevards.