USEFUL INFORMATION ABOUT ALL CITIES, VILLAGES AND RESORTS IN BULGARIA

Bulgarian properties in city of Sofia

Sofia, the capital of Bulgaria is the biggest city in the country. Sofia is a dynamic Eastern European capital, distinguished by its unique combination of European and Communist-style architecture, as well as many beautiful orthodox churches. Furthermore, it claims to be one of the few European capitals with beautiful scenery and a developed ski-resort so close to it - the Vitosha mountain.

Sofia's development as a significant settlement owes much to its central position in the Balkans. It is situated in western Bulgaria, at the northern foot of the Vitosha mountain, in the Sofia Valley that is surrounded by mountains on all sides. Three mountain passes lead to the city, which have been key roads since antiquity, connecting the Adriatic Sea and Central Europe with the Black and Aegean Seas.
A number of low rivers cross the city, including the Vladaiska and the Perlovska. The Iskar River in its upper course flows near eastern Sofia. The city is known for its numerous mineral and thermal springs. Artificial and dam lakes were built in the last century.
It is located 130 kilometres northwest of Plovdiv, Bulgaria's second largest city, 340 kilometres west of Burgas, 380 kilometres west of Varna, Bulgaria's major port-cities on the Bulgarian Black Sea Coast. The city is situated at less than 200 kilometres from the borders with three countries: 55 kilometres from Kalotina on the Serbian border, 113 kilometres from Gyueshevo on the frontier with the Republic of Macedonia and 183 kilometres from the Greek border at Kulata.

Sofia has a history that goes back thousands of years. Through the centuries, many peoples have inhabited it and added to its rich and diverse history. Numerous Neolithic villages have been discovered in the area, while a chalocolithic settlement has been recently discovered in the very center of modern Sofia.

The Thracian Serdi tribe settled here in the 7th century BC and gave the first recorded name of Sofia - Serdica. The Byzantines called it Triaditsa and the Slavs - Sredets. The modern city of Sofia was named in the 14th century after the basilica St. Sofia. In Greek, word sofia means wisdom. In the 3rd century AD, the Romans built strong walls around Serdica, their capital of Inner Dacia and an important stopping point on the Roman road from Naisus (present Nish, Yugoslavia) to Constantinople. Today there are many archaeological sites in Sofia, that display the city's diverse history - the castle gates and towers of Serdica, public buildings and streets thousands of years old. A large part of the ancient city of Serdica is underneath important modern buildings. The ancient city council (bulefteris) is hidden under the "Sheraton" hotel, while a number of basilicas are below the National Historical Museum. The Roman thermal baths are under the Sofia Mineral Baths and a Roman residence with elaborate mosaics is below the "Rila" hotel. After the Hun invasion of 441, the town was rebuilt by the Byzantines. The Slavs gave Sredets a key role in the First Bulgarian Empire, then in 1018 the Byzantines retook Triaditsa. At the end of the 12th century, the Bulgarians returned and Sredets became a major trading center of the Second Bulgarian Empire. The Turks captured Sofia in 1382 and made it the center of the Rumelian beylerbeyship. The city declined during the feudal unrest of the 19th century, but with the establishment of the Third Bulgarian Empire in 1879, Sofia once again became the capital of Bulgaria.

Since ancient times the city was famous for the abudance of cold and thermal mineral water springs in and around it. The water is still available today and is praised for its numerous qualities. Springs may be found in the city center, as well as in the neighbourhoods: Kniazevo, Gorna Bania, Bankia, Ovcha Kupel and Ivaniane. 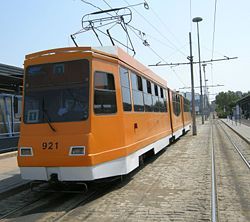 Sofia is the centre of important international railway and automobile routes from Western Europe to Istanbul via Belgrade, from Greece and Macedonia to the CIS. There are daily bus connections to Ohrid, Strumitsa, Skopje, Nish, Istanbul, Athens, Thessaloniki.
21 tramlines, 11 trolley lines and about 200 bus lines perform the city transport services. Two-cabin and two-seat lifts connect Sofia with Vitosha national Park. The modern requirements of the city traffic make a general and gradual reconstruction of the street transport net as well as that of the motorways leading to Sofia and the construction of communication facilities a first priority.
The settlements in Sofia are joined in one municipality-greater Sofia Municipality with an area of 119,400 hectares and population of 1,220,000. The Greater Municipality includes 61 settlements, of which 4 are towns – Sofia, Bankya, Buhovo, Novi Iskar. Inside the ringroad, the area of Sofia city is 19,815 hectares, 2,087 of which belong to the city transport and communications and 510 to the railways.
The large residential satellite-quarters are connected with the central part of the city and the industrial zones through several main diagonal connections. 75-80 per cent of the passengers cross the central part of the city and that has been one of the most difficult problems to tackle.
The population outside the ringroad is served by two systems – Bulgarian State Railways and the City Transport.
There are no administrative limitations with regard to the use of private transport. Private transport, however, constitutes a rather small percentage – 5-6 per cent of all work related journeys. This is due to the high price of automobiles and fuel, therefore private transport cannot be an alternative to public transport at this stage.
About 85 per cent of travelers use the public transport, which is consequently the reason for its considerable socio-economic importance. 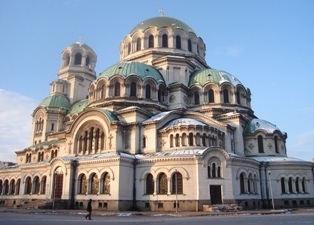 ALEXANDER NEVSKI MEMORIAL CHURCH - Completed in 1912 in honour of the Russian casualties of the 1877-78 War of Liberation from Ottoman Rule. Gold-domed, it is the finest piece of architecture in the Balkans. Craftsmen and artists from 6 countries worked on the five-aisle church in the course of 30 years and created real masterpieces of icons, frescoes, murals and huge chandeliers. The interior decoration, made of Italian marble. Egyptian alabaster, Brazilian onyx, gold, mosaics embodies the spirit of the finest Eastern Orthodox traditions. A superb collection of icons - the best in Bulgaria - can also be seen in the Crypt.

ROTUNDA OF ST. GEORGE - A C4 brick building in the courtyard behind the Sheraton Hotel, adorned with finely preserved early medieval frescoes. There are also remains of a C2 street and other Byzantine ruins.

ST. SOFIA CHURCH - The 4th-6th century basilica was built during the reign of Justinian. It has survived intact with 1600- year-old mosaic details and towards the end of the C14 gave the city its name. Beside the wall of the church is the Tomb of the Unknown Soldier. Nearby is the grave of the national poet and writer Ivan Vazov, marked by an engraved boulder.

THE NATIONAL PALACE OF CULTURE - The biggest Congress Centre in the Balkans. It is located in the centre of the city and faces the Vitosha Mountain.

THE CHURCH OF ST. NEDELYA - (Opposite the Sheraton Hotel) Built in medieval times and known as the Church of the Blessed Sveti Kral. The current building was reconstructed after 1925 when it was almost completely destroyed by a bomb explosion.

VASSIL LEVSKI MONUMENT - Vassil Levski was the principal architect of the campaign to free Bulgaria from the oppression of the Ottoman Empire. The monument marks the spot where he was hanged by the Turks in 1873.

SOFIA UNIVERSITY - The country's most prestigious university. It was built a decade after Sofia became Bulgaria's capital in 1879 with funds bequeathed by the brothers Evlogi and Christo Georgiev.

DRAGALEVTSI - A suburb in the woods at the foot of Mount Vitosha. About 3 km further on is DRAGALEVTSI MONASTERY, founded during the reign of King Ivan Alexander. Frescoes date back to the C15. The church, which is part of the original monastery, often sheltered the Apostle of Freedom Vassil Levski during the C19.

BOYANA - A suburb at the foot of Mount Vitosha, notable for the BOYANA CHURCH, built in the C11. Frescoes are claimed to be among the oldest and most interesting examples of East European Medieval art. Like Rila Monastery, the BOYANA CHURCH has been listed by UNESCO as a part of the world s cultural heritage.
THE RUSSIAN CHURCH

MOUNT VITOSHA - It has become very much a part of Sofia owing to its accessibility by means of the cabin lifts at Knyazhevo and Simeonovo. Cherni Vrah, the highest point, gives wonderful views over the whole region. The winter ski-resort Aleko lies at 1868 m and the ski season lasts from early December until late spring. The beautiful scenery makes the whole area attractive throughout the year. 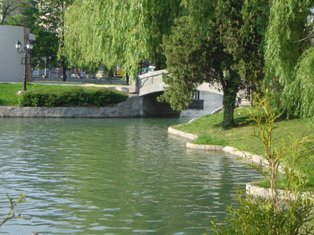 The National Archeological Museum, 2 Saborna Str.
National Museum of History, 6 Vitoshko Lale Str. The National Museum of History in Sofia contains more than 650,000 exhibits and is one of the largest history museums on the Balkans. The aim of the museum is to provide a comprehensive view on Bulgarian history from the prehistory to present, in as broad an European context as possible. Be prepared to spend several hours as the museum is quite large. About half of the exhibits have English captions.
The Earth and Man National Museum, 4 Cherni Vruh Blvd.
Sofia City Art Gallery, 1 General Gurko Str.
The National Museum of Natural History, is four floors of everything from rocks and minerals to insects and stuffed bison. It is a nice way to spend a rainy afternoon.
The Ethnographic Institute and Museum, has a permanent collection of traditional Bulgarian costumes as well as a changing exhibition.
The Central Bathhouse, is an old building of interest, although it is in process of renovation at the moment.
Slaveykov Square is the open-air book market.
Knyaz Battenberg's Palace, right in front of the city garden.
The nice building of the National Theater "Ivan Vazov".
Boris Garden, the "lungs" of the city, with Ariana Lake.
The Monument to the Liberating Tsar, representing the power of freedom and across from it are the National Assembly and the Bulgarian Academy of Sciences.
Boulevard "Tsar Osvoboditel", the "Yellow Brick Road". Extends from TSUM toward Sofia University in front of many of the main sights of the center.
The ruins of the ancient town of Serdica, located in the geographical centre of the city under the flags of the EU.