Kavala is the second largest city in northern Greece, the principal seaport of eastern Macedonia and the capital of Kavala prefecture. It is situated on the Bay of Kavala, across from the island of Thasos.

Kavala, the prefectural capital, is one of the most attractive of Greece's largest cities, rising like an ampitheatre from the beautiful harbor up to a huge Byzantine fortress. Built on the ancient city of Neopolis, the cities population doubled in 1922 when the Greeks from Asia minor made there way here during the exchange of populations. The spacious squares, contemporary buildings, and shopping centres on the west side of the city form a pleasant contrast to the traditional old houses, tiny gardens and flagged alleyways of the eastern side. The harbour is particularly picturesque with its countless brightly coloured fishing caiques moored along the waterfront. Among the city's impressive landmarks are the old walls, the Byzantine castle, and the Kamares - the aqueduct erected by Suleiman the Magnificent in the 16th century , Mehmet Ali's house (18th century) and the Imaret, a Turkish building.
The walk up to Profitis Ilias to admire the panoramic view over the city takes you through the fascinating old district. The old houses of the Panagia quarter of town are in excellent condition. In particular the Imaret, an old building with 18 domes overlooks the harbor. A youth hostel in Turkish times the building is now a cafe. The archaeological museum contains finds from the ancient city of Amphipolis, a colony of Athens. 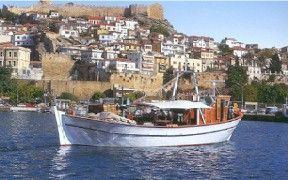 There are many places to stay, as there are in any city including government run and private campsites. There are hotels of every catagory. Restaurants are excellent and plentiful. Those recommended by Loney Planet are To Plakakia, a low priced estiatorio at Doiaranis 4 near Platia Elefterias, Michalis Taverna on Platia Kapnergati and three popular restauarnts across from the Imaret, Taverna Ouzeri tou Thoma, To Steki tou Kanadou and Antonia restaurant. For coffee and cheese pies try Cafe George on a side street off Eleftheriou Venizelou
If you like to swim and eat fresh fish, then head for the lovely beaches and friendly tavernas not far from town at such places as Kalamitsa, Palio, Nea Iraklitsa, Raspani, Perigiali, and Nea Peramos.
Other villages in attractive settings are Agios Silas, with its homonymous monastery, Palia Kavala, Krioneri, Korifes and Stavros on a hill, for those interested in scenic views.
Not far from Kavala (17 km.), near the tobacco producing villages of Krinides and Filipi, you'll find the ruins of the ancient Macedonian city of Filipi, named after its founder, Philip II. Still visible on the site are the remains of two Early Christian basilicas, traces of the via Egnatia, the grand Roman forum, the acropolis, and the theatre. Performances of ancient drama are held every su mer in the restored theatre.
There is a spa at Loutra Eleftheron (67 km. from Kavala) with installations for hydrotherapy.
Kavala is linked by Air with Athens and charters from several major European cities. The ferry connects it with Thassos (hourly), Lesvos, Lemnos, Chios, Samos, Samothrace, Rafina, Pireaus and the Dodekanese islands.

Kavala's medieval castle is located at a hill above the town. Additionally, the town's fortifications are still widely visible, especially in the coastal front. Cosmopolis International Festival is one of the biggest ethnic festivals in Greece. 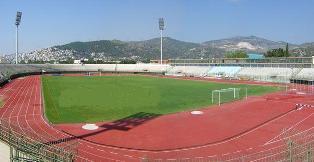 Kavala Stadium "Anthi Karagianni" is located in Kavala, a north-eastern city of Greece, 170 km. east of Thessaloniki. The stadium itself lies by the road leading east, to Xanthi and the airport. It is right next to the sea. The distance from the city centre is about 3 km. If you drive to Kavala from Thessaloniki, do not leave the motorway at the exit signposted "Kavala", but use the next one to "Nea Karvali, Kavala East" instead. All you have to do then is to simply follow signs to Kavala and you will get right outside the stadium after about 4 km.
Kavala Municipal (formerly "National") Stadium is named after Anthi Karagianni, an athlete who won three silver medals in the 2004 Paralympic Games. Kavala Stadium was somewhat upgraded in 2004, but works involved almost everything except basic amenities for the fans! There are, however, plans to install seats and construct a roof over part of the stands, something that is regarded as necessary. The stadium is owned by the Municipality of Kavala.
Internet resources: Wikipedia for Kavala