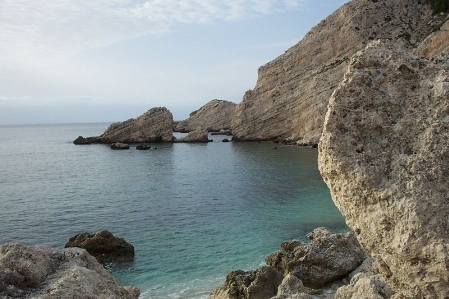 The island of Kefalonia, also known as Cephallenia, Cephallonia, Kefallinia, or Kefallonia (Ancient Greek: Κεφαλληνία; Modern Greek: Κεφαλλονιά or Κεφαλονιά; Italian: Cefalonia), is the largest of the Ionian Islands in western Greece, with an area of 350 sq. miles. It is also the larger of the two islands forming the Kefalonia and Ithaka Prefecture, and contains eight of the prefecture's nine municipalities or communities. (Ithaca is on a separate island.)

The island is named after the mythological figure Cephalus (Ciphalis), although some hold its name literally means "island with a head", referring to the island's shape; the name "Ciphalis" is derived from the Greek word for "head".

The capital of the Kefalonia prefecture is Argostoli. The island's population is nearly 45,000; it previously was home to the fastest growing population in Greece, with a growth rate of 35% to 40% during the 1990s. It was officially 36,404 at the census of 2001. The size of the island is ca. 800 km² (300 mi²), and the present population density is 55 people per km² (140/mi²), with Argostoli home to one-third of the island's habitants. Lixouri is the second major settlement, and the two towns together account for almost two-thirds of the prefecture's population.
Kefalonia is located in the heart of an earthquake zone, and dozens of minor or unrecorded tremors occur each year. In 1953, a massive earthquake almost destroyed settlement on the island, leaving only Fiscardo in the north untouched.
Most of the Kefalonia population have surnames ending in "-atos". Almost every community in Kefalonia has a name ending in "-ata", such as Valsamata, Frangata, Lourdata, Favata, Delaportata, and others.
In the ancient period, before it was named Kefalonia, the island was known to have a population of only 100 to 300; at the ancient founding of Kefalonia, the population trebled to around 500 - 1,000 people. The population grew steadily, until it reached 10,000 in the mid-20th century, with the total topping 20,000 by the 1970s.

Kefalonia's highest mountain is Mount Ainos, with an elevation of 1628m (almost the same elevation as Denver, Colorado in North America); to the west-northwest are the Paliki mountains, where Lixouri is sited, with other mountains taking in Gerania and Agia Dynati.

Forestry is rare on the island; however its timber output is one of the highest in the Ionian islands, although lower than that of Elia in the Peloponnese. Forest fires were common during the 1990s and the early 2000s. These fires still pose a major threat to the population of Kefalonia.

The primary agricultural occupations of Kefalonia are animal breeding and olive growing, with the remainder largely composed of grain and vegetables. Most vegetable production takes place on the plains, which cover less than 15% of the island; the majority of the island is rugged and mountainous, suitable only for goats. Less than a quarter of the island's land is arable.
The majority of Kefalonians lived in rural areas before the 1970s, while today the urban population accounts for two-thirds of the prefecture, and the other third remain in rural towns and villages close to farmland.

There are five harbours and ports in the prefecture: four main harbours on the island, Same or Sami, and a major port with links to Patras and Ithaca. Poros, in the south, has ferry routes to Kyllini; Argostoli, in the west, is the largest port, for local boats and ferries to Zante and regularly to Lixouri; Fiscardo, in the north, has links to Lefkas and Ithaca. There is room for about 100 small boats in Argostoli, where the port stretches 1 kilometre around the bay, while Lixouri is situated 4 km across the bay from Argostoli, on the Lixouri peninsula. There is a road connection to the rest of the island, but driving from Lixouri to Argostoli involves a 30 km detour.