Crete (Greek: Κρήτη, transliteration: Krētē, modern transliteration Kriti) is the largest of the Greek islands and the fifth largest island in the Mediterranean Sea at 8,336 km² (3,219 square miles).
Crete was the center of the Minoan civilization (ca. 2600–1400 BC), the oldest Greek civilization.
Today Crete is one of the thirteen peripheries of Greece and a significant part of the economy and cultural heritage of Greece. While it keeps its own local cultural traits (e.g. its own music and dialect), Cretans openly identify themselves as Greeks.
For centuries the island was known by its Italian name Candia, from the medieval name of its capital Heraklion, Chandax (Greek: Χάνδαξ or Χάνδακας, "moat", Turkish: Kandiye). In Classical Latin it was called Creta and in Turkish Girit.
Crete is the location of significant ancient history, which provides popular modern day tourist destinations. They include the Minoan sites of Knossos and Phaistos, the classical site of Gortys, the Venetian old city and port of Chania, the Venetian castle at Rethymno, and the Samaria Gorge. 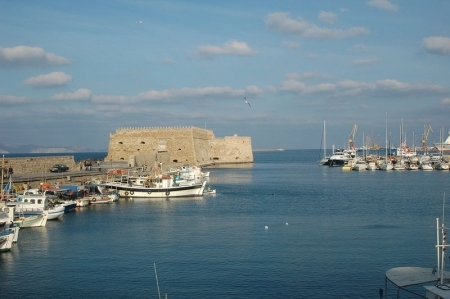 The first human settlements on the island, dating to the aceramic Neolithic, used cattle, sheep, goats, pigs, and dogs, as well as domesticated cereals and legumes; ancient Knossos was the site of one of these major Neolithic (then later Minoan) sites. Crete was the center of Europe's most ancient civilization; the Minoan. Early Cretan history is replete with legends such as those of King Minos, Theseus, Minotaur, Daedalus and Icarus passed on orally via poets such as Homer. Crete was involved in the Mithridatic Wars, initially repelling an attack by Roman general Marcus Antonius Creticus in 71 BC. Nevertheless, a ferocious three-year campaign soon followed under Quintus Caecilius Metellus, equipped with three legions, and Crete was finally conquered by Rome in 69 BC, earning for Metellus the title "Creticus". Gortyn was made capital of the island, and Crete became a Roman province, along with Cyrenaica.
Crete was part of the Byzantine empire, but then was captured by Iberian Muslims led by Abo Hafs Omer Al-Baloty [2] who established an emirate on the island. In 960 Nicephorus Phocas reconquered the island and held it under Byzantine control until 1204, when it fell into the hands of the Venetians at the time of the Fourth Crusade. During Venice's rule, which was more than four centuries long, a Renaissance swept through the island as is evident from the plethora of artistic works dating to that period. The most notable fruits of the Cretan renaissance were El Greco and Vitsentzos Kornaros. In 1669, after a 21-year siege, Candia fell to the Ottoman empire.
Under the rule of Christian Venetians, the city of Candia was reputed to be the best fortified city of the eastern Mediterranean. [3] Jewish, Armenians were the largest minority groups living in Crete. The Jews were attracted during the period of the mass expulsion from Spain in 1492.[4] In 1627, there were 800 Jews in the city of Candia, about seven percent of the city's population.[5] In 1574-77, Crete was under the rule of Giacomo Foscarini as Proveditor General, Sindace and Inquistor. According to Starr (1942), the rule of Giacomo Foscarini was the dark age for Jews and Greeks. Under his rule, non-catholics had to pay high taxes with no allowances. This practice ended when the Ottomans conquered Crete.
During the Ottoman rule, many churches and monasteries were converted to mosques. However, freedoms and rights were still provided. Church attendance was permitted. Still, many Christians converted to Islam through intermarriage with Muslims. The Islamic law permitted the marriage of a Muslim man to a Christian women, but not the reverse. Through these processes, the population of Christians declined. The city was surrounded by high walls and bastions and extended westward and southward by the 17th century. The most opulent area of the city was the Northeastern quadrant where all the elite were gathered together. The city had received another name under the rule of the Ottomans, the deserted city.[6] The urban policy that the Ottoman applied to Candia was a two-pronged approach.[7] The first was the religious endowments. It made the Ottoman elite contribute to building and rehabilitating the ruined city. The other method was to boost the population and the urban revenue by selling off urban properties. According to Molly Greene (2001) there were numerous records of real-estate transactions during the Ottoman rule. In the deserted city, minorities received equal rights in purchasing property. Christians and Jews were also able to buy and sell in the real-estate market.
Muslim presence in the island started with the Arab occupation but was cemented by the Ottoman conquest. Most Cretan Muslims were local Greek converts who spoke Cretan Greek, yet at the dawn of Greek nationalism, the Christian population labeled them "Turks".[8] Contemporary estimates vary, but on the eve of the Greek War of Independence, as much as 45% of the population of the island may have been Muslim.[9] Many among them were crypto-Christians who converted back to Christianity in subsequent years, while many others fled Crete because of the unrest, settling in Turkey, Rhodes, Syria and elsewhere. By 1900, 11% of the population was Muslim. Those remaining were forced to leave in 1924 in the Population exchange between Greece and Turkey.
Uprisings by Christians were met with a fierce response from the Ottoman authorities who several times executed bishops, regarded as ringleaders[citation needed]. Crete was left out of the modern Greek state by the London Protocol of 1830, and soon it was yielded to Egypt by the Ottoman sultan. Egyptian rule was short-lived and sovereignty was returned to the Ottoman Empire by the Convention of London on July 3, 1840.

Between 1833 and 1897, several more Christian uprisings took place, and in 1898, Crete, a complex autonomous Cretan State under Ottoman suzerainty, was nevertheless garrisoned by an international military force, and with a High Commissioner (Armostis) chosen by Greece[citation needed]. During these years Cretan volunteers played an important role in the Greek struggle for Macedonia and in the Balkan wars[citation needed]. Finally, in the aftermath of the Balkan wars Crete joined Greece on 1 December 1913.
During World War II, the island was the scene of the famous Battle of Crete where in May 1941, German paratroopers sustained almost 7,000 casualties, meeting fierce resistance by the locals and the British Commonwealth force, commanded by General Sir Bernard Freyberg. As a result, Adolf Hitler forbid further large scale airborne operations there during the war.

Crete, with a population of 650,000 in year 2005, is one of the 13 regions into which Greece is divided. It forms the largest island in Greece and the second largest (after Cyprus) in the East Mediterranean. The island has an elongated shape : it spans 260 km from east to west and 60 km at its widest, although the island is narrower at certain points, such as in the region close to Ierapetra , where it reaches a width of only 12 km. Crete covers an area of 8,336 km², with a coastline of 1046 km ; to the north it broaches the Sea of Crete (Greek: Κρητικό Πέλαγος); to the south the Libyan Sea (Greek: Λιβυκό Πέλαγος); in the west the Myrtoan Sea, and toward the east the Karpathion Sea. It lies approximately 160 km south of the Greek mainland.
Crete is extremely mountainous, and its character is defined by a high mountain range crossing from West to East, formed by three different groups of mountains. These are:
• the White Mountains or Lefka Ori (2,452 m);
• the Idi range (Psiloritis 2,456 m);
• the Dikti mountains (2,148 m);
• Kedros (1,777 m);
• Thripti (1,489 m)
These mountains gifted Crete with fertile plateaus, such as Lasithi, Omalos and Nidha; caves, such as Diktaion and Idaion; and gorges, such as the famous Gorge of Samaria. The protected area of the Samaria Gorge is the home of kri-kri, while Cretan mountains and gorges are refuges for the endangered vulture Lammergeier (Gypaetus barbatus).
There are a number of rivers on Crete, including the Ieropotamos River on the southern part of the island.

Crete straddles two climatic zones, the Mediterranean and the North African, mainly falling within the former. As such, the climate in Crete is primarily temperate. The atmosphere can be quite humid, depending on the proximity to the sea, while winter is fairly mild. Snowfall is common on the mountains between November and May, but rare in the low lying areas, especially near the coast when it only stays on the ground for a few minutes or hours. However, a truly exceptional cold snap swept the island in February 2004, during which period the whole island was blanketed with snow. During the Cretan summer, average temperatures reach the high 20s-low 30s Celsius (mid 80s to mid 90s Fahrenheit), with maxima touching the upper 30s to mid 40s (above 110 Fahrenheit).
The south coast, including the Messara plain and Asterousia mountains, falls in the North African climatic zone, and thus enjoys significantly more sunny days and high temperatures throughout the year. In southern Crete date palms bear fruit and swallows remain year around, not migrating to Africa.