We expect growth of Russian tourists in Bulgaria 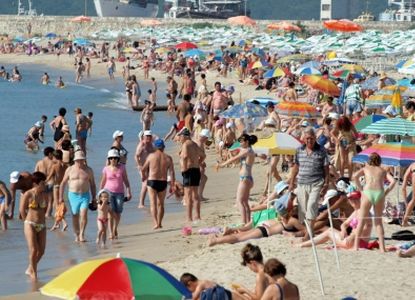 This year the number of tourists from Russia can be increased to 30%, said in Provadiya the Deputy Minister of Economy, Energy and Tourism Branimir Botev. He said that two weeks ago issued 300-strong visas. For now, the growth of these tourists is over 17% and it is possible to reach 30, said Botev. He also said that the German market recorded a slight decrease of about 7-8% of those who want to relax at home.

The season is going very well, said Botev. He stressed that the branch has proven he can handle beautifully and without the state.

Deputy Minister added that began developing a new strategy for the development of Bulgarian tourism. He pointed out that currently there is a document that has a term of four years, the last is the present. According to Botev's future strategy should be at least 15 years.

New national logo contest cannot have, said the Deputy Minister. He said that if the state gives up to the so far made so it must restore the money to the EU.

Deputy Minister Botev participated in the discussion of the development of tourism in Provadiya the campaign "The Miracles of Bulgaria," says BTA. Also took part in the conversation and Culture Minister Petar Stoyanovich. Among other things, economy, culture and professional presentation of the product, the minister said Stoyanovich.

He added that in the fall will begin a conversation with historians and archaeologists to specify whether to continue the practice to give some money for a variety of subjects or to prioritize to get serious funding. There will be a meeting with representatives of municipalities, added Stoyanovich.