Sunny Beach expects 6% growth of tourists for the 2013 season 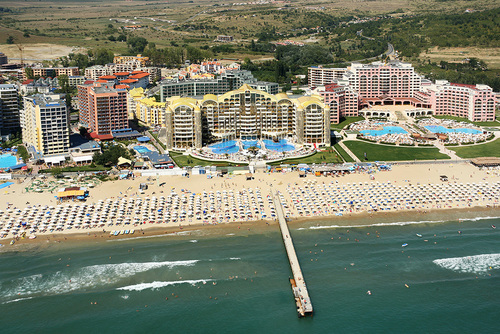 Forecasts of the company "Sunny Beach" AD for the past summer season is 6% growth in visits of tourists, it was clear from his report submitted by the Executive Director Zlatko Dimitrov. Traditionally, the most numerous are Russian and Ukrainian tourists who stayed at the resort during the four summer months. Holidaymakers from Poland and Czechoslovakia began returning. There are many visitors from Romania who visit the complex with own transport.
A key indicator of the increased number of tourists is around 4% increase in charter flights to Burgas Airport. In fact this is the only guide that can roughly imagine how many tourists visited the resort, said Zlatko Dimitrov.
Accurate information about who lived in the complex for tourists no discrepancy between registered, current operating beds and revenues of nights.
Disparity in the data is a fact. For 2012, for example , Nesebar municipality reported revenues from resort tax base of nights spent at the rate of 1.5 million levs to registered about 80 000 beds . While for the same year in the Sunny Beach indicating more than 250 000 beds and Burgas Airport allegedly received more than two million passengers.
For the first time in a decade in 2013, the resort opened the season in April and in a month welcomed 7000 Austrian pensioners. Commitment to them is a challenge for the leadership of the company and for hoteliers as it includes standard and unusual measures in their service.
Review for stay of elderly Austrians here at all levels is excellent. The complex will be ready to meet as many Austrian retired in the spring of 2014.
Downloading the season in the early months of spring and the status of tourists stepped towards changing market segment. In order to implement the reform, however, is needed a new policy, strategy development and investment in tourism infrastructure. It cannot be realized without legislative initiatives in the field of tourism, regional development and the concession of the beaches, said Zlatko Dimitrov.
In season 2013 has further developed the existing video surveillance system in the complex. Replaced the cameras are installed new higher resolution and night vision capabilities. There are new items for surveillance in areas with a high concentration of tourists - "Cocoa Beach" promenade surrounding hotels "Glarus", "Largo".