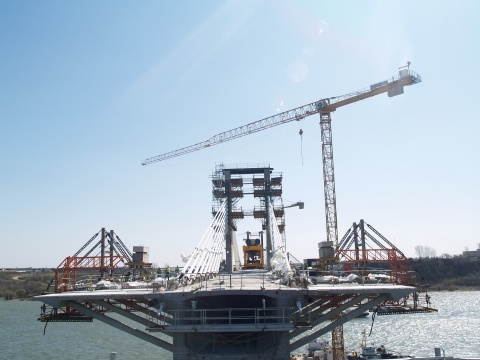 The second bridge linking Bulgaria and Romania across the Danube has been completed at 81%, the Spanish construction firm FCC announced Monday.
The adjacent infrastructure of the Vidin-Calafat bridge has been completed more than 90%, with the so called Danube Bridge 2 expected to be fully operational at the end of 2012.
The builders have already launched into operation some of the road junction at the bridge, and have completed the international passenger and freight railway terminals in Vidin.
FCC said that "if the weather is nice", the bridge will be fully completed by the end of 2012 but "if the temperatures during the winter months do not allow this, the final layer of asphalt and hydroisolation will be left for 2013".
The company also pointed out that the total price of the bridge is EUR 232 M. Of those, the Bulgarian Finance Ministry has already paid EUR 190 M.
On the Romanian side, the adjacent infrastructure of the bridge has been completed at 95%.
In January 2011, the sum of EUR 25.7 M was added to the total cost of theconstruction of the second bridge linking Bulgaria and Romania across the Danube River, as agreed by the Bulgarian Parliament.
The bridge will finally be completed by the end of November 2012, Bulgaria'sTransport Ministry announced as the Bulgarian Parliament voted to approve the measures taken by Transport Minister Ivaylo Moskovski over the past two years in order to ensure the completion of the bridge between Bulgaria's Vidin andRomania's Calafat.
He explained that the one tangible risk for the completion of Danube Bridge 2 stemmed from unresolved issues under the contract with Spanish company FCC, which is constructing the bridge, as a result of changes in the Bulgarian and Romanian legislation after the EU accession of the two Balkans states and because of unfavorable engineering and geological conditions on the construction site.
The Bulgarian government explained that in order to resolve the issues it agreed on modifications in the design and schedule of the bridge construction, which led FCCto demand additional payments.
After analyzing the claims of the Spanish firm, the Bulgarian government agreed in August 2011 to additional payments amounting to EUR 25.7 M. In order to come up with the money, it resorted to reserve funds under the financial memorandum for EU funding for the bridge, which has not been approved by the Bulgarian Parliament.
The construction of the Vidin-Calafat bridge was set to be completed by October 2010, but has been significantly delayed due to technical difficulties and claims by Spanish firm FCC.
The original push for the construction of a second Danube Bridge between Bulgaria and Romania came as a result of the NATO bombing of Milosevic's Yugoslavia in 1999.
After the campaign subsided, however, the procedures for the bridge dragged on. It was supposed to be ready by 2010 but land expropriation procedures and disputes between the Spanish firm FCC and the governments of Bulgaria and Romaniaobviously delayed the construction.
When finally completed, Danube Bridge 2 will be third ever bridge in the Bulgarian-Romanian section of the Danube in the past 2000 years.
In the 4th century Roman Emperor Constantine I the Great built the largest river bridge in ancient times, Constantine's Bridge on the Danube, which was 2.5 km long, 6 meters wide, and existed in 328 AD - ca. 355 AD.
The "next" bridge (today's Ruse-Giurgiu Bridge) on the Lower Danube, in the Bulgarian-Romanian section of the river was built only in 1954, about 1 600 years later, at the initiative of the Soviet dictator Joseph Stalin.
Text and photo: novinite.com