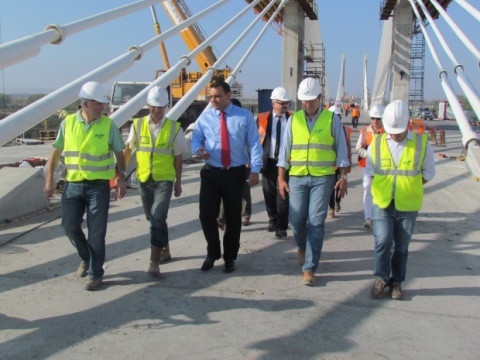 The builders of the second Danube Bridge between Bulgaria and Romania have 18 more meters to go in order to complete the long-anticipated facility, Bulgarian Transport Minister Ivaylo Moskovski has announced.

On Wednesday, Moskovski inspected the construction of the long-delayed bridge, which is to connect Bulgaria's Vidin and Romania's Calafat.

The total length of the bridge will be 1791 meters once the last 18 meters get completed, the Bulgarian Transport Ministry said.
"About 86% of the construction has been completed; the financial contract has been executed at 96%," Moskovski specified.

Referring to past demands for compensations by the project executor, Spanish construction company FCC, the minister said the Bulgarian state had done "everything necessary to solve its problems and guarantee the funding for the project."

The Transport Minister stressed his expectations that the so called Danube Bridge 2 would create jobs and boost economic growth in Bulgaria's Northwest, which is the poorest EU region.

Moskovski predicted that over 100 000 vehicles will use the Vidin-Calafat Bridge in the first year after its launch.

The construction of the Vidin-Calafat bridge was set to be completed by October 2010, but has been significantly delayed due to technical difficulties and claims by Spanish firm FCC.

The original push for the construction of a second Danube Bridge between Bulgaria and Romania came as a result of the NATO bombing of Milosevic's Yugoslavia in 1999.

After the campaign subsided, however, the procedures for the bridge dragged on. It was supposed to be ready by 2010 but land expropriation procedures and disputes between the Spanish firm FCC and the governments of Bulgaria and Romania obviously delayed the construction.

When finally completed, Danube Bridge 2 will be third ever bridge in the Bulgarian-Romanian section of the Danube in the past 2000 years.

In the 4th century Roman Emperor Constantine I the Great built the largest river bridge in ancient times, Constantine's Bridge on the Danube, which was 2.5 km long, 6 meters wide, and existed in 328 AD - ca. 355 AD.

The "next" bridge (today's Ruse-Giurgiu Bridge) on the Lower Danube, in the Bulgarian-Romanian section of the river was built only in 1954, about 1 600 years later, at the initiative of the Soviet dictator Joseph Stalin.